Revenues for microLED TVs will increase to $228 million by 2026, according to the newly released MicroLED Display Technology and Market Outlook Report from DSCC. Although consumers are very enthusiastic about microLED technology, the report finds that microLED will only have a small share of the TV market due to a high retail price.

Sony first demonstrated a microLED TV at CES in 2012 but the product was never released to the general public. Sony later commercialized modular displays for video walls and Samsung Visual Display followed suit by launching “the Wall”. The Wall is also a modular video wall, with pixel pitches of 1.68mm, 1.26mm and 0.84mm.

Samsung’s 0.84mm module started shipping last year with a resolution of 960 × 540 pixels. A 146” display with a 4K resolution required 16 modules, which meant the price was over $300,000. At the beginning of 2020, Samsung unveiled a full range of microLED display sizes, at 75”, 88”, 93”, 110” and 150”. These models have a smaller pixel pitch and are manufactured with a different process. However, the cost will still remain high compared to other technologies on the market. 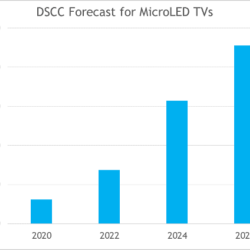