TCL Technology Group, the corporate parent of China Star Optoelectronics Technology (CSOT), announced this week an agreement to acquire Samsung Display’s assets in Suzhou, China, including a Gen 8.5 fab and a co-located LCD module plant. Under the deal, TCL will pay Samsung more than $1 billion, but the majority of the money is returned to TCL as an investment, and Samsung Display will become a minority shareholder in a TCL subsidiary.

The transfer price was listed as US$1.080 billion (~CNY 7.622 billion) for both businesses. At the same time, Samsung Display will pay US$739 million (~CNY 5.213 billion) to purchase a stake in TCL subsidiary TCL Huaxing via a capital increase. TCL Huaxing is the subsidiary holding CSOT’s large gen display fabs, including its Gen 8.5 and Gen 10.5 fabs (TCL calls these Gen 11, but DSCC recognizes them as Gen 10.5) in Shenzhen.

Within the $1.08 billion total, the payment for the Gen 8.5 fab is $739 million, which corresponds to the Samsung capital increase in TCL Huaxing. The other $341 million for the module plant represents a cash transfer from TCL to Samsung. 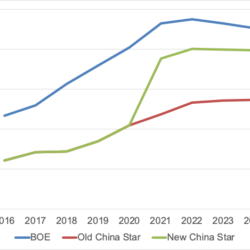 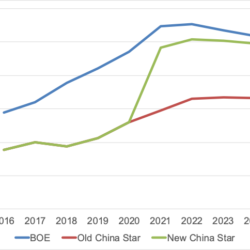