Samsung remained the #1 brand for TV shipments in Q2 2020, despite a modest Y/Y decline in shipments, while TCL surged past LG Electronics for the #2 spot, according to the latest update of the DiScien Monthly Global TV Shipment Report, available in Japan, Europe and the Americas through DSCC’s exclusive relationship with DiScien. The report covers quarterly TV shipments for the top 15 global TV brands by brand, screen size, display technology, resolution, and geographical region, with pivot tables to enable fast and easy analysis.

Worldwide TV shipments from the top 15 brands declined by 2% Y/Y to 38.0 million. Looking at the demand picture by region in the first chart here, a big increase in North America plus a smaller increase in China were not able to overcome sharp declines in emerging regions. TV shipments to North America increased 39% Y/Y to 9.5 million, and shipments in China increased 5% Y/Y to 11.0 million, but shipments to Eastern Europe, Latin America and Middle East/Africa declined by 22%, 35% and 31% Y/Y, respectively. 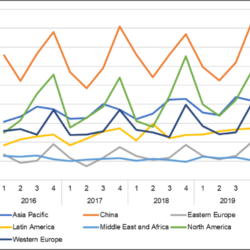 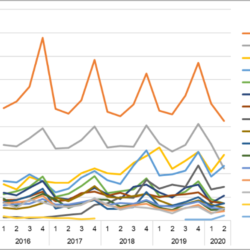